A Statement of Solidarity Against the Philippines’ Anti-Terrorism Act of 2020 from CIRCA-Pintig,USA
June 12, 2020

We from CIRCA-Pintig commemorate the 122 years of Philippine Independence at a time when the whole world is experiencing a global health pandemic brought upon by COVID-19.

However, the greatest threat facing Filipinos in the Philippines is more severe than the virus that has killed thousands of our kababayan due to lack of government support and corruption from officials who presumably provided assistance to the neediest people impacted by the pandemic. The Anti-Terrorism Act of 2020 is a bigger threat to the lives and civil liberties of the Filipino people.

This impending anti-terrorist legislation recently approved by Philippine Congress provides a platform to the Duterte administration to continue to exercise the silencing of dissenting voices who criticize his failure in addressing the ongoing healthcare crisis and the spiraling social, political, and economic crisis in the country. A recent June 4 report released by the United Nations High Commissioner for Human Rights attested to the fact that since 2016, thousands of Filipinos have been killed at the hands of the police. This legislation will create a new Anti-Terrorism Council (ATC) who will be empowered to define what constitutes “terrorism,” order arrests without warrants, and detain individuals for mere suspicion of being involved in terrorist organizations. Thus, this bill is tantamount to exercising martial law as it concentrates an enormous amount of power to the Duterte administration, allowing it to usurp judicial power, make arbitrary arrests, and extend the period of incarceration for individuals who are suspected of promoting or inciting terrorism. The legislation exacerbates state-sanctioned violence by dissolving accountability for law enforcement, increasing surveillance of suspected individuals, deploying tactics of torture, and creating new categories of criminal offenses. As a proponent of the anti-terrorism legislation, Senator Vicente “Tito” Sotto admitted during his deliberation that once this bill becomes law, there is no need for martial law to be declared. It is clear that this bill was meant to target people and organizations who advocate for social justiceand change.

As a community arts organization involved in social justice issues here in the US, we echo the call to dismantle state-sanctioned violence and work toward genuine social, political and economic change both in the US and in the Philippines. We call on our Filipino American community to be one with us in opposing the proposed Philippine government’s Anti-Terrorism bill and to stop the red-tagging of activists and organizations. We call on the US government to stop the $2 billion sale of US weaponryto the Duterte administration. We call on the Philippine government not to use the people’s tax money to buy arms instead of supporting their frontline workers. Every dollar that the US receives from this weapons sale is a drop of Filipino blood from those who will lose their lives as a result of the arms escalation. 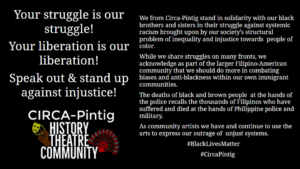 We from Circa-Pintig stand in solidarity with our black brothers and sisters in their struggle against systemic racism brought upon by our society’s structural problem of inequality and injustice towards people of color.

While we share struggles on many fronts, we acknowledge as part of the larger Filipino-American community that we should do more in combating biases and anti-blackness within our own immigrant communities.

The deaths of black and brown people at the hands of the police recalls the thousands of Filipinos who have suffered and died at the hands of Philippine police and military.

As community artists, we have and continue to use the arts to express our outrage of unjust systems.